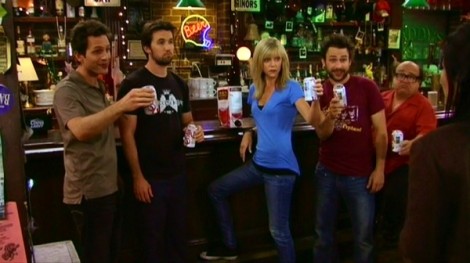 Three years ago I came up with the idea of putting together a drinking game to accompany weekly viewings of It’s Always Sunny in Philadelphia, a show that, for the most part, was still trying to find mainstream success. And because I didn’t have a blog at the time, I was relegated to scribbling down the “rules” on a Taco Bell napkin at a girlfriend’s apartment. That was 2007. Now, in 2010, which is dozens of Taco Bell napkins and girlfriends later, I’ve finally decided to officially publish my long overdue It’s Always Sunny in Philadelphia drinking game. Of course, Sunny is now a ridiculously popular show, meaning every jabroni has since put together his or her own drinking game, most of which are crammed with so many rules that you can realistically find yourself drinking for a half hour straight. Not necessarily a bad thing, but I always found the point of drinking games, especially those involving television shows or movies and are more of the sit-and-wait variety, is that they have the ability to allow the participant(s) to enjoy two things simultaneously, rather than it being purely a means of drinking faster to get drunk sooner.

So here’s my very concise, very manageable It’s Always Sunny in Philadelphia drinking game; it’s engaging enough to give you a good buzz without being too demanding that it draws your attention away from the show. And despite it being written three years ago, it’s still very apt. (I played it during the “Mac’s Mom Burns Her House Down” episode from two weeks ago and had an absolute shitkicker of a time.)

GIF of the Day